There are no more feverishly contested topics of discussion than those of Science and Scripture.  The are truly the powder kegs of modern-day debate.  The relativism of theology verse science.  The most preeminent being that of Creation verse Evolution.

It is an ideological verse scientific battle of David and Goliath or, in this case, Darwin verse God.  Is the Earth 6000 years old or 4.5 billion (give or take a few 100 million one way or the other).  This is the land of Biblical literalism verse Biblical hermeneutics or non-literalism.

The bell rings…’NOW FIGHTING IN THIS CORNER’ (the announcer screams)…in the green trunks…On the Origin of Species!!…and now entering the ring…in the white trunks…the champion of the ages, the highest of high…ttttthhhhhheeeee…Holy Bible!!..(the crowd cheers as the opponents circle each other in the center of the ring).

A simple match up…said no one ever…in no way, shape or form.  Both, even in themselves and their proverbial ‘circles of influence’ they are not met with 100% of the same interpretation, fact or findings.  I will tread lightly for now, but dig much deeper into specifics in articles to follow.

Let’s begin with a simple 101 on the argument.

As we are all very well aware Charles Darwin published On the Origin of Species on November 24th, 1859.  The three primary concepts (yes, these are WAY over simplified) of his theory are:

Now let’s summarize the history of creation in the Bible – Genesis Book 1.  This summary was found in the article The Creation Story – Bible Story Summary:

Basically billions of years verse 7 days of Creation and a theory that could destroy the foundation of an entire religion / religions.  Can’t see why this is so hotly contested; the debate still goes deeper however.  There are a few subplots to this story.

The first and most notably subplot begins with some Christian’s belief that the bibles book of Genesis provides only for a ‘Young Earth’, that of which the Earth is only about 6000 years old, this is a number they derive as a literal interpretation of the biblical text stemming from chrono-genealogies of ages of named father’s at time of their son’s or sons’ birth.  The Young Earth theory allows for no acceptance of Darwin’s theory.  It must completely dismiss it.  Why? For Darwin’s Evolution to occur, or many other theories of evolution, a much greater amount of time is needed.  Again, a gross oversimplification but necessary to assure we can get through the basics of the topic.

In opposition to the ‘Young Earth’ theory there is an opposing interpretation now held by many that leaves room for a much older Earth, ‘Old Earth’.  In comes Biblical hermeneutics or non-literalism and you can find the path that say basically the 7 days outlined in Genesis does not represent ‘actual’ 24 hour days as we identify them today.   Over simplifying to say the least but nonetheless the basis of the theory.

There is also the subplot in the Darwinism story-line.  This is Darwinism verse Lamarckism, Mutation and Synthetic theories of evolution.  Oh, did I happen to mention the variants of Microevolution and Macroevolution…confused yet.  Don’t be, just know that Young Earth advocates will accept Microevolution but not Macroevolution…of course so will Old Earth advocates; aggravated yet, at points in time in my research I wondered myself why I even was attempting to deepen my knowledge.  The question was easily answered however, it impacted the very fabric of my being and my understanding of my existence.  But, back to our story, Macroevolution referring to a series of mutation,  migration, genetic drift, and natural selection above the species level over a period of let’s say…3.8 billion years.  Huh?…picture time!!! 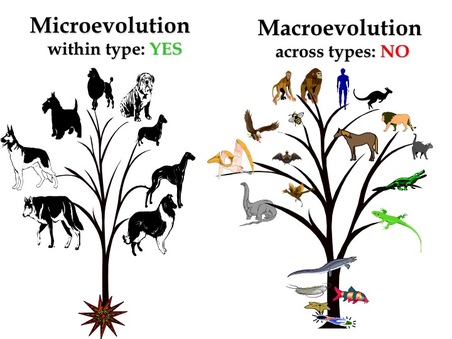 These evolutionary theories in their entirety are stories for another day but it would be helpful to pick one.  So for the sake of this article we will highlight Mutation…well right after you see the chart below that shows you are not alone if you are somewhat undecided.

Based on a 2014 Pew Research Center Survey many, must like you, are not 100% decided (as a religion) which theory is accurate.  Also not exactly sure how, for example, you can subscribe to believe in Evolution purely ‘Due to Natural Processes’ and still be categorized as Christian or Catholic?

So we have divided religious communities and what you will see below is also a divided scientific community, as referenced above.

So back to the Mutation theory in opposition to Darwin’s theory of Evolution.  Once again, this is just one of the opposing theories; I am not here as an advocate to its accuracy, rather just documenting it’s existence for the sake of this discussion.  In the article Mutation, Not Natural Selection, Drives Evolution is presented the theory of Masatoshi Nei that has quickly gained traction in the scientific community as a viable opposing viewpoint to Darwin’s theory of evolution.

“Every part of our body is controlled by molecules, so you have to explain on a molecular level. That is the real mechanism of evolution, how molecules change. They change through mutation. Mutation means a change in DNA through, for example, substitution or insertion [of nucleotides]. First you have to have change, and then natural selection may operate or may not operate. I say mutation is the most important, driving force of evolution. Natural selection occurs sometimes, of course, because some types of variations are better than others, but mutation created the different types. Natural selection is secondary.”

So, can there be a peaceful coexistence between Science and Scripture, a proverbial meeting grounds of agreement.  Yes, but something has to give one way or the other and it appears even important religious figures are budging towards exactly that.

In Christianity and Catholicism the ‘Young Earth’ theory was held to be fact, or was it.  Well not according to the Pope Francis or Popes before him.  To be more specific and as stated in Sorry, But Media Coverage of Pope Francis is Papal Bull: Pope Francis said the following incendiary statement that put the Catholic community into a frenzy over its apparent dismissal of God as divine being, but he does state, in his viewpoint, Evolution and Creationism are not inconsistent with one another:

“Evolving Topics of Nature,” and he affirmed what Catholic teaching has been for decades. “God is not a divine being or a magician, but the Creator who brought everything to life,” he said. “Evolution in nature is not inconsistent with the notion of creation, because evolution requires the creation of beings that evolve.”

In the same article was also cited:

Pope Pius XII wrote an encyclical “Humani Generis” in 1950 affirming that there was no conflict between evolution and Catholic faith.

It doesn’t seem to matter that Pope Benedict XVI called the debate between evolution an creation an “absurdity” in 2007.

Well that’s the Catholic Church, what about Christian leaders?  Let’s take the now departed but long prominent Christian Evangelist Billy Graham.  Although he does not directly state he believes in Evolution he does state there is no conflict between today’s science and scripture.  He goes on to say he believes in the story of Creation however it matters not if man came by evolution or creation; in either case God created man.

“I don’t think that there’s any conflict at all between science today and the scriptures. I think that we have misinterpreted the Scriptures many times and we’ve tried to make the Scriptures say things they weren’t meant to say, I think that we have made a mistake by thinking the Bible is a scientific book. The Bible is not a book of science. The Bible is a book of Redemption, and of course I accept the Creation story. I believe that God did create the universe. I believe that God created man, and whether it came by an evolutionary process and at a certain point He took this person or being and made him a living soul or not, does not change the fact that God did create man. … whichever way God did it makes no difference as to what man is and man’s relationship to God.” Billy Graham: Personal Thoughts of a Public Man, 1997. p. 72-74

I think it extremely important we explore this overall topic to a much deeper level, and with an open mind, to truly understand how each interpretation impacts our existence, our societies and our everyday lives.   This could truly lead to a new awakening and a deeper consciousness of the world that surrounds us.  We are a work of art and there is no denying so is our Earth and Universe.

I leave you with two quotes; one from Darwin and one from Scripture, to illustrate the contradictory nature of the topic we have just discussed.  It is, as always, for you to make the decision on how you will combine your faith and your knowledge of science to choose your own understanding and acceptance of your existence.

Thus says the Lord, your Redeemer, who formed you from the womb: “I am the Lord, who made all things, who alone stretched out the heavens, who spread out the earth by myself, who frustrates the signs of liars and makes fools of diviners, who turns wise men back and makes their knowledge foolish, – Isaiah 44:24-25 ESV / 87

“Science has nothing to do with Christ, except insofar as the habit of scientific research makes a man cautious in admitting evidence. For myself, I do not believe that there ever has been any revelation. As for a future life, every man must judge for himself between conflicting vague probabilities.” – Charles Darwin

We must stay awake, be aware, think with an open mind and be vigilant in the defense of our rights, our freedoms, our existence and our protection of humanity.