If you haven’t been watching Russian President Vladimir Putin in recent months you are missing one of the great re-election scripts ever written.   The March 18th elections could mark Putin’s 4th term in office.  The stage has been set from what have been and are some of the most laughable and terrifying moments in this Russian ‘election’ campaign.

The Russian President’s state-run media has been working overtime to assure their candidate wins re-election.  How you might ask, oh my friends, truth once again is stranger than fiction.  It all starts with a Rubber Ducky….seriously.

US plots to ‘overthrow Putin with a rubber duck’

Officials in the Russian city of Izhevsk have rumbled an attempt by the United States to overthrow the country by deploying a yellow rubber duck.

That is the claim, at least in evidence they have offered to court, to justify refusing permission for an opposition rally led by Alexei Navalny.

Oh, the old duck defense…crazy right?…no, they are serious.  They argued we employed the rubber duck as a symbol for revolution!  Alexei Navalny was arguably the only person who any chance of beating Putin.  A long time anti-corruption advocate and the opposing ‘voice of the people’, once compared to the Russian version of Nelson Mandela.  Alexei has garnered increasing support even through multiple arrests by Putin for corruption, yes, so said ‘corruption’.  Sounds like a great run off right…oh no, Putin had him banned from running due to a criminal conviction.

However, don’t fear, there are other candidates in the running…right?  Oh yes, eight in total, including a Reality TV Star and a Strawberry farmer…need I say more.  You really can’t make this stuff up.

According to Newsweek.com in their article:

Sobchak’s rhetoric may surprise some outsiders, given how close Putin was to her father, the late mayor of St. Petersburg Anatoly Sobchak, who was once Putin’s mentor and close ally. Putin reportedly stood as her godfather when she was born, in 1981. Sobchak is also a millionaire in a country where personal wealth is hard to hold on to if you’re on the wrong side of the Kremlin. And she remains a part of the ruling elite: Former President and current Prime Minister Dmitry Medvedev has accompanied Sobchak’s mother to lay flowers at her father’s grave at Nikolskoe cemetery.

Some Russia watchers speculate that Sobchak must be a Kremlin ally planted in the elections to draw support away from the more visible opposition leader Alexei Navalny, who has been jailed by the Kremlin repeatedly and banned from running for office. Some audience members at Columbia even asked Sobchak if she was a Kremlin puppet rather than an opponent.

Even Sobchak admits the system is rigged and has virtually no chance of winning.

With his competition even admitting there is virtually no chance of winning why does it appear the Kremlin is a bit nervous when they have either silenced the dissenter or don’t feel any real threat of a viable candidate?   Low voter turn out.  It is estimated at under 60% as of now; a dangerously low number that would indicate a lack of support for the President and ultimately an opening for dissenting parties to claim he does not represent the interests of the people.

What to do, what to do…oh, wait…let’s roll out unstoppable nuclear missiles.   In the great words of William Shakespeare:

All the world’s a stage,
And all the men and women merely players;

The weapons he boasted of included a cruise missile that he said could “reach anywhere in the world”.

He said of the West: “They need to take account of a new reality and understand … [this]… is not a bluff.”

Now that should make us take him seriously.  It would without a doubt make sure everyone forget that he barred his competition, has a low voter turn out, no real competition and has rubber ducky protests occurring all over his country.  It’s like a school yard bully, if he can rattle his sabers loud enough then no one will question his authority.  Politics in an election where the outcome is ultimately already decided.

There is only one more thing to do, he must make himself the savior of Russia; take a more ‘godlike’ position. 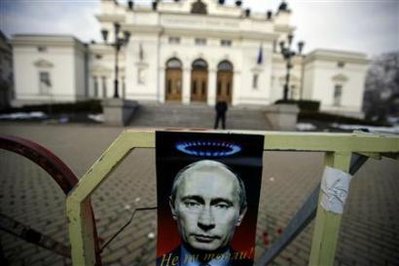 According to the article on BBC.com:

Putin cast as national saviour ahead of Russia election

With elections looming in March, leading state-controlled TV channels are roping in religion to cast him as a national saviour who healed Russia’s historical divisions and rescued the nation from chaos.

But the Kremlin still seems to be nervous. The man widely seen as Mr Putin’s most potent challenger, protest leader and anti-corruption campaigner Alexei Navalny, has been barred from standing, over a criminal conviction that many see as a political manoeuvre.

It appears that no matter what moves he makes; he cannot shake this stigma of a ‘rigged’ and ‘pre-determined’ election result and a potential lack of his people’s support.  I would be prepared for a much expanded fear campaign leading up to and after the election.  It will be critical for Putin to assure the world respects his authority and there is no doubt of the ultimate power he controls over his people.  We must hope that this posturing, in light of instabilities with North Korea, China and the U.S. does spin out of control and result in more dire outcomes.